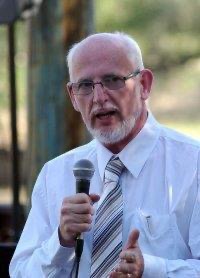 Aled Edwards was brought up in Trawsfynydd in Snowdonia National Park. Having graduated from Saint David's University College, Lampeter in 1977, he completed his theological training in Trinity College, Bristol. Following his ordination to the Church in Wales in 1979 he served a number of communities in Arfon and on the Ll?n Peninsula enjoying an interest in mountaineering and rural affairs.

While serving as a parish priest in Botwnnog on the Ll?n Peninsula (1985-93) Aled pioneered a community pastorate scheme bringing different churches together and worked closely with the young farmers movement. He built on that experience of bringing people together following his time as Vicar of the Welsh speaking Anglican congregation at Dewi Sant Church, Cardiff (1993-99). Following his appointment as the Cytûn: Churches Together in Wales' National Liaison Officer in 1999, he worked with Welsh faith community leaders and the late Rhodri Morgan, as First Minister, to establish the Welsh Government's Faith Communities Forum.

Aled Edwards has worked extensively in the equalities and human rights arena. Having served as a member of the Equal Opportunities Wales Advisory Committee he was appointed Wales’ Commissioner on the Commission for Racial Equality (2006-07). Between 2007 and 2017 he served as a member of the Equality and Human Rights Commission's statutory Wales Advisory Committee subsequently acting as the Welsh representative on the GB Commission's statutory Disability Committee.

Since 2001, Aled Edwards has maintained a close interest in immigration and asylum matters serving at various times as Chair of Displaced People in Action, the Welsh Refugee Council and the Home Office sponsored Wales Strategic Migration Partnership. In these roles Aled encouraged some of Wales' black and ethnic minority communities to enjoy national parks. In 2006, he received an OBE for his charitable services in Wales.

Aled Edwards was appointed CEO of Cytûn in 2006. He lives in Cilfynydd in Rhondda Cynon Taf and has made good use of the nearby Brecon Beacons to train for running marathons and ultra marathons. On being appointed, Aled said: "I've had the privilege of being brought up in a national park. I've also had the privilege of serving the breadth of Wales' communities in all their rich diversity. I hope I will be able to make a contribution to the work of the Authority by enabling many to enjoy such fantastic breathing spaces in a manner that allows the environment and communities to flourish and prosper together."