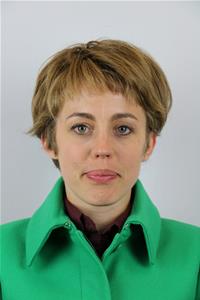 I was elected to represent Llangorse on Powys County Council in May 2017 and appointed to the Brecon Beacons National Park Authority shortly afterwards.  I am Powys’ first ever Green Party County Councillor and am currently the only one in Wales. I am married with two young children,

I have a first class degree in environmental science and a master’s degree in environment, development and policy.  I have spent my professional life working hard to encourage environmental, social and business interests to work together, particularly in the fields of food and farming. I’ve worked with communities, farmers, manufacturers, retailers, government and NGOs in a range of settings, from cleaning compost loos in a field to lobbying at the European Parliament in Brussels and representing growers at the Houses of Parliament in London.

I started out in food business and quickly moved into the third sector after finishing my first degree. I found my forte as Media Officer for Compassion in World Farming in 2007 but my desire to better understand the global context of our environmental and social challenges led me to return to study for a Master’s Degree.  I then worked for Heineken UK Ltd on its sustainable supply chains which led to various strategic, research and networking projects including with the National Association of Cider Makers.

In 2011, I applied for the network management role with the Bulmer Foundation and was successful. The network was a great success and I was awarded the industry’s most prestigious award, the Fred Beech Trophy, for my ‘outstanding contribution to the cider industry’. I later took on the role of Communications Manager, but was made redundant from the Bulmer Foundation following the loss of its core sponsor.

In my spare time, I am interested in local food and growing projects, and now that I have my own pigs, am a keen student of pig husbandry and butchery.

I have also been a Trustee of Madley Environmental Studies Centre since March 2014 and Treasurer of MESC since 2015.