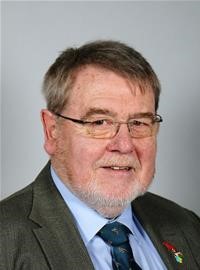 Appointments to outside bodies

Edwin Llewelyn Roderick, Powys Councillor for Maescar / LLywel ward is a Welsh speaking beef and sheep farmer brought up on the family farm in the Crai valley. He is married with three grown up sons, the youngest of whom runs the family farm.

Local community life has always been important to Edwin, but it was during the Foot and Mouth outbreak of 2001 when he was asked to help set up and chair the Epynt action group, which after many meetings with the Welsh Assembly and the then Prime Minister Tony Blair that his leadership and organisational skills came to the fore, when the Group was successful in stopping the burial and burning of carcasses on the Epynt range.

Some of the committees Edwin has served on include Sennybridge Show, Crai Hall Management and the Farmers’ Unions. He is an active member of The Welsh Commoners Association. Edwin is currently Chairman of Crai Community Council. In his spare time Edwin enjoys traditional Welsh culture, and is often called upon to organize and compere Charity Concerts. He is a member and chairman of Aberhonddu and District Choir.

He was appointed to the National Park Authority in May 2017.